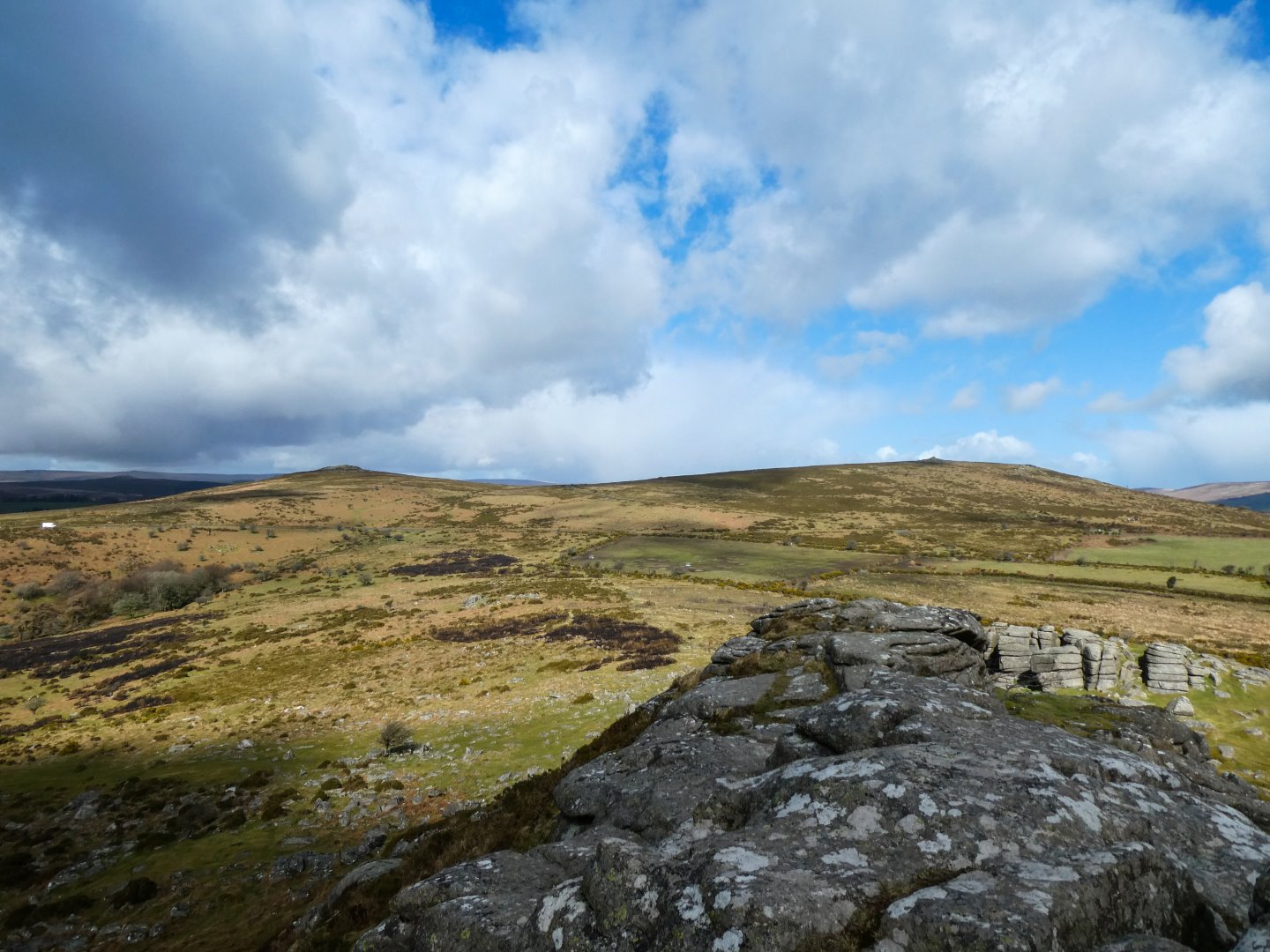 Over the years I’ve driven past Sharp Tor many times, I’ve even pulled in at the little car park and sat looking at the rather striking Tor. However I’ve never explored this part of the moor and decided it was time to remedy that.  When I looked at the map I noticed that there were also two other tors in the vicinity and decided I may as well  bag all three. 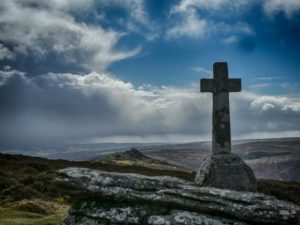 I parked in the car park at Sharp Tor (SX681732 / TQ13 7PT) and decided that I would tackle the other two tors before Sharp Tor. Corndon Tor was farthest away and so I made my way along the road for a short distance and then cut across the moor to meet the small road that winds it’s way between Yar Tor & Corndon Tor. Looking across to the summit of Corndon Tor I wasn’t too keen to cross the ground between me and the top as it was covered in thick heather and ‘grass tufts’. Now most walkers who are familiar with Dartmoor will know of the ‘grass tufts’. They seem to appear on peaty ground where the roots of the grass have held the ground in a ‘clump’ while the rest of the ground around the tuft has been eroded over time. The result are thousands of knotted tufted grass mounds with narrow channels, 10-20cm deep between them and crossing this type of ground is really hard work, let alone the increased risk of twisting an ankle or worse!

I eventually found a track that had been well worn and headed toward the cross that sat a hundred metres or so further up. As I approached I realised this wasn’t just a normal Dartmoor Cross but a memorial. The inscription was to an Evelyn Anthony Cave-Penney who was killed in the First World War and the inscription reads:

TO THE GLORY OF GOD AND TO THE DEAR MEMORY OF EVELYN ANTHONY CAVE PENNEY LIEUT. Q.V.O. CORPS OF GUIDES FELL IN PALESTINE WHILST GALLANTLY COMMANDING HIS MEN JUNE 8TH 1918 AGED 19. LOOK UP AND LIFT UP YOUR HEADS 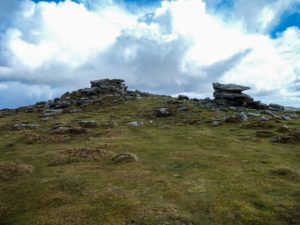 Continuing up the track the summit stacks came into view and I was actually surprised quite how large it was; from the car park it’s clear that most of it is hidden. At 434m, Corndon Tor sits at a commanding height and the views from its summit are quite something. Five miles to the NW I could clearly see the distinct line of tors I had walked a few weeks ago (Longaford, Higher White etc), to the north was Fernworthy, Whitehorse Hill; to the south was Venford Reservoir and Sharp Tor and in the east the vast granite mass of Haytor was visible along with Rippon Tor, Honeybag Tor and a large assortment of others. Also visible from the summit were remains of two large prehistoric cairns each with a diameter approaching 30m, standing 2m high and constructed of thousands of granite boulders. Archaeologists still don’t know the true significance of Dartmoor’s cairns (which are scattered all over the moor) however the most common thought is that they were built as boundary markers or memorials; most were built between 2300 and 1400 BC making them early Bronze Age. 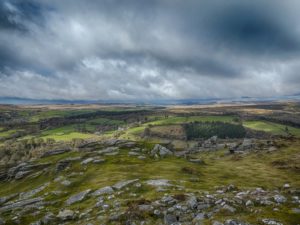 I had a quick break and enjoyed the views before heading back down the same track I had walked up. When I reached the road I crossed and found the track to take me to the summit of Yar Tor, passing a stone row on my right close to the road. As I neared the top I could see the low flat granite slabs with what appeared to be another cairn on top of it, however when I climbed up to take a closer look it seemed that someone had rearranged the rocks into a spiral which locally is known as the ‘Maze Cairn’. As I gazed north I realised that Yar Tor actually consisted of many rock outcrops spread over a wide area with its westerly slopes plunging down toward Dartmeet and ‘Badger’s Holt’. 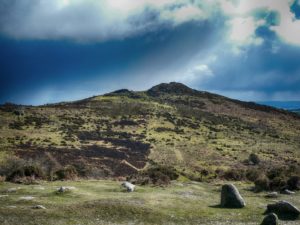 The cold wind was really beginning to bite and the exposure on top of Yar Tor made it even worse so I decided to make for the relatively lower Sharp Tor. I followed a track back down to the main road and crossed, immediately picking up the track to Sharp Tor. Sharp Tor is similar to Leather Tor in as much as it’s a large pyramid of granite with near sheer faces on three sides and before too long I was climbing the large rock formation heading for the top. By now the wind was really strong and as I reached the top I was wary about precariously balancing on the highest rock to take photos. Even though Sharp Tor was lower than its two larger neighbours, the views were no less spectacular, including a rather breath-taking view of both of the Tors I had just visited. I stayed a little while on the top taking photos and enjoying the peace and fresh air.

After a time I headed back down the way I had ascended and picked up a track which led me back to the car. Although it was a short walk at only three miles with only around 350ft of climbing, it was actually a really lovely walk on a part of the moor that I am not familiar with and all three Tors that I had visited we’re all impressive in their own right. I thoroughly enjoyed this walk and has earned a place as one of my favourites.

Difficulty
This walk is 4.8km / 3.0mi
No part of this route crosses into any military ranges
There are no bogs
Easy