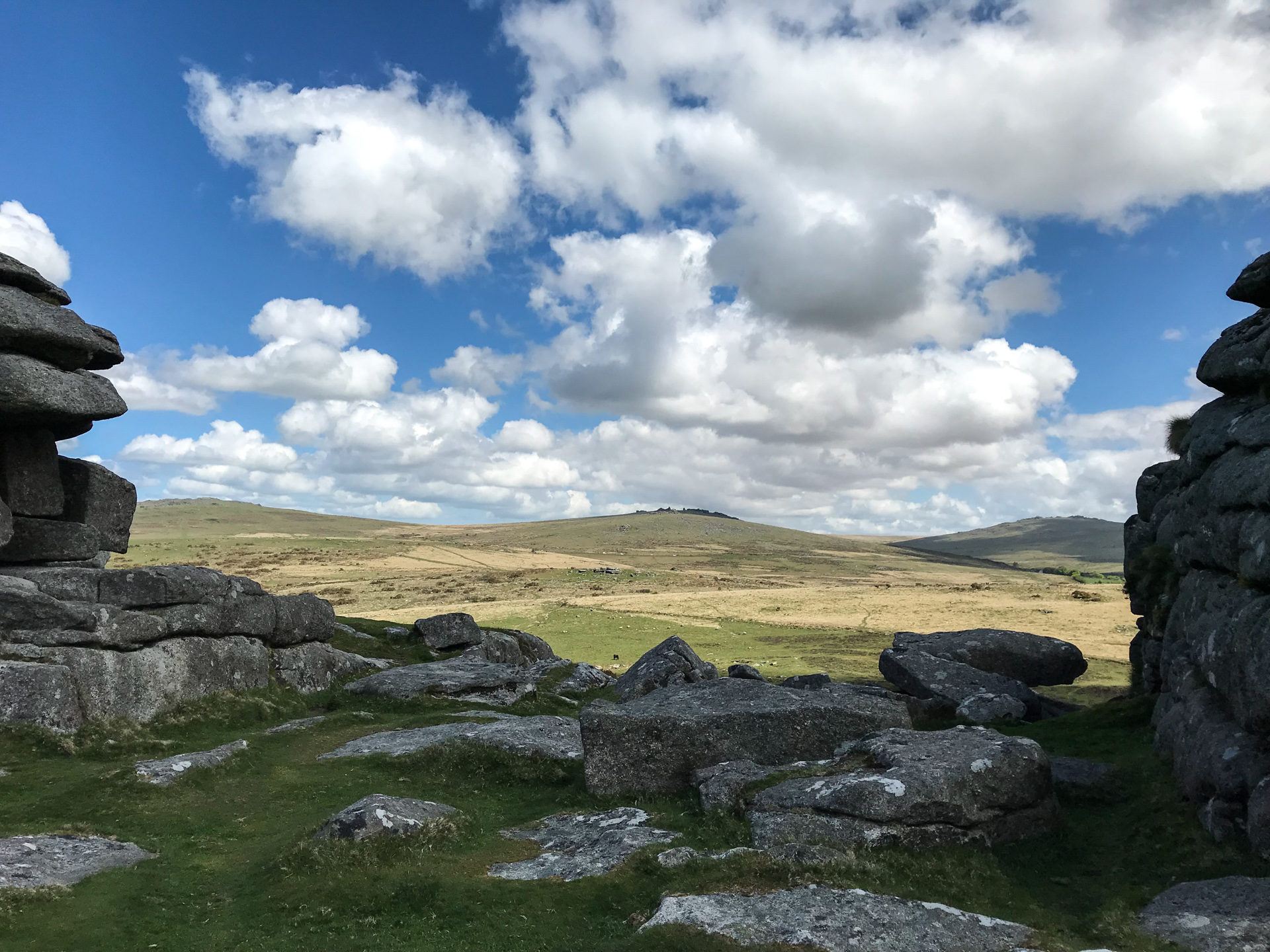 Another beautiful sunny day out on Dartmoor. After last week’s exertions up on Eylesbarrow I fancied something a little more sedate and decided on Pew Tor.

I parked my car at Cox Tor car park (SX530751 / PL19 9LQ) on a beautiful, bright & sunny Sunday morning and headed straight for Barn Hill Rocks. As always, this little bit of moorland was buzzing with dog walkers however there seemed to be a liberal sprinkling of ponies and sheep around too. As I approached Barn Hill Rocks the scenery really opened out. You get this amazing view across to Pew Tor and well down into Cornwall and beyond… but the real breath-taking moment is when you turn around to face Cox Tor, Great Staple Tor & Great Mis Tor. Seeing the three giants sitting there from that close up is quite a view. 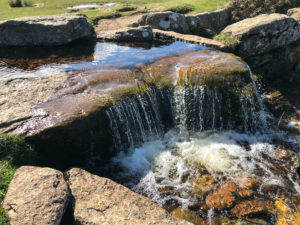 Continuing on, I walked down a small slope toward a Stone Cross. It sits on a leat at a point where it splits. This is Windy Post (its real name is Beckamoor Cross however Windy Post is more commonly used). It’s known to be from around the 16th Century (although there is evidence to suggest it could be earlier in the 1400s) and is generally believed to be a replacement for a much older cross that once stood on that spot. The cross is thought to have been placed as a marker along the trans-moor route between the Tavistock to Buckfast Abbeys that was used by the monks of the time. Windy Cross also appears to be connected to both Pixies Cross and Merrivale Menhir because if you draw a line between those two, Windy Cross sits right in between. The cross also sits at a confluence in the leat where it splits to service multiple farms. 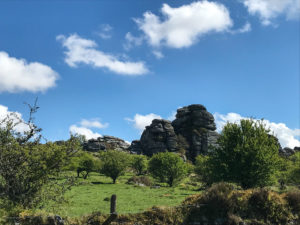 From here I decided to take a slight detour via Vixen Tor, well, the boundary wall anyway. So Vixen Tor has been the subject on an ongoing struggle between the owner, local farmer Mary Alford, and ‘ramblers’ since she bought the land and closed off access to the Tor in 2003. In that time it’s seen several mass trespass protests from ramblers who disputed her right to restrict their right to roam. Unfortunately in 2011 Vixen Tor was closed permanently after a planning enquiry ruled that there was no right to roam over the land and that, was that. As a keen walker I do feel that, as part of Dartmoor, it should be open to the public however I do understand Mrs Alford’s position regarding safety and the risk of her being sued because someone is stupid enough to fall off the tor. 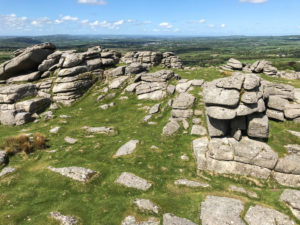 From Vixen Tor there is a short steep climb back up to Heckwood Tor, a fairly plain Tor consisting of nothing more than a collection of flat, low level rocks perched on the side of the slope down to Vixen Tor. As you continue across the plateau, it’s only a couple of hundred meters to Pew Tor which sits at the end before descending into the woods around Sampford Spiney. As you approach Pew Tor you suddenly realise that in fact it is made up of several big rock outcrops which are arranged in a circle around the top of the tor forming a natural hollow centre. The views between the outcrops are something else though. There is a good view to the SW through one gap and one to the N which frames Cox Tor, Great Staple Tor & Great Mis Tor beautifully. With the weather I had on my walk it made for a spectacular photograph (At the top of this post)

I climbed up onto the highest stack of rocks where I discovered a disc inset in the rock inscribed “Hydrographic Department MOD Navy London SW9 Triangulation Station HMS” which appears to be some kind of triangulation station. I got my brew kit out and made a cuppa and enjoyed the sunshine, lack of wind and the views which are just amazing from up there. After an hour or so it was time to make a move back to the car so I climbed back down and followed a track back to Feather Tor and then back over Barn Hill Rocks to the car park.

This is a lovely little walk of less than three miles which can be swapped and changed to make bigger if needed. It offers good terrain, some sites of historical interest and two of the Moor’s most famous Tors.

Difficulty
This walk is 4.5km / 2.8mi
No part of this route crosses into any military ranges
There are no major bogs although ground around Vixen Tor boundary can be marshy at times
Easy