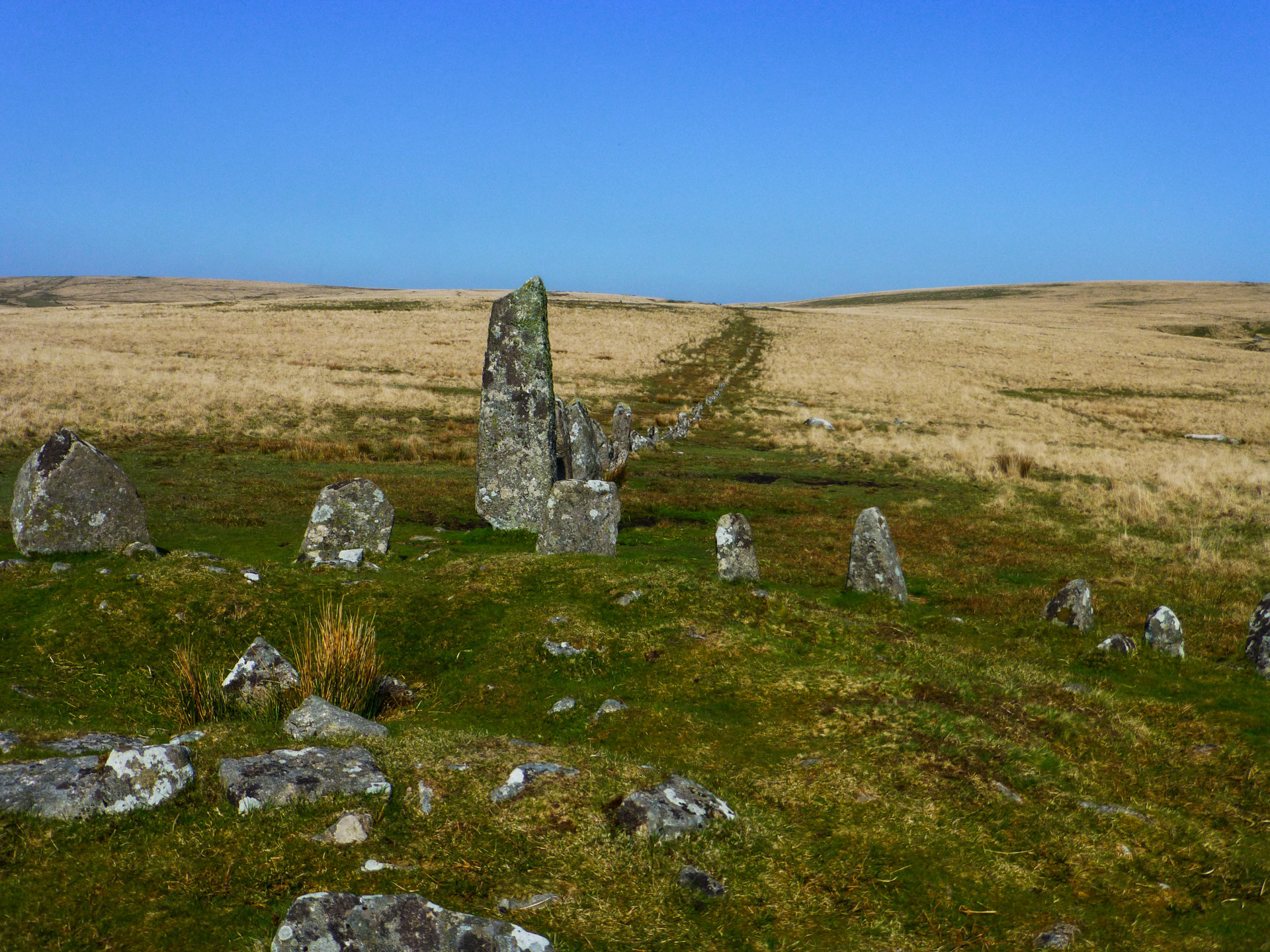 All of the years I’ve lived on and close to Dartmoor and as well as I know the Burrator area, I’d never been to either Combeshead or Down Tor so I seemingly chose the hottest day of the year to pay them a visit. I parked my car at Norsworthy Bridge Carpark again (SX568693 / PL20 6PF) and this time headed out along the SE path which skirted along the base of Down Tor however instead of climbing from here I was heading up to Eylesbarrow. I followed the bridlepath, crossed Narrator brook and headed up a very steep track which popped me up on the Moor above Roughtor Plantation about 1km north of the Gutter Tor car park. I followed an old boundary wall for about a mile until it intercepted the main track up to Eylesbarrow. 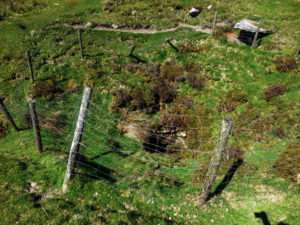 As I got closer to the top I came across a lot of the old mine workings and several very deep pits which were the remains of the old shafts, now capped by clearly had subsided over time. You probably wouldn’t want to go dancing around on the tops of them, that’s for sure. Eylesbarrow Tin mine was a substantial operation that was in operation in the early 1800s and at the time was one of the largest tin mines on Dartmoor. Around the Eylesbarrow site there are 25 shaft heads to be found and in some of these you can still see the stone collar at the top of the shaft itself. As well as the shafts there are also three visible adits. Adits are horizontal shafts (rather than vertical) and at Eylesbarrow two of them are still open and accessible (although a tight squeeze), a third is mostly blocked but still discharges water from the mine and there is a fourth adit documented in mine records but this has never been found 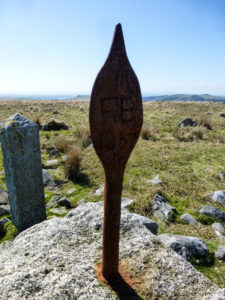 From the mine I climbed my way up to the summit of Eylesbarrow where I came across the Eylesbarrow ‘Cobra’. The cobra is actually nothing more than a boundary marker denoting the boundary between the old Walkhampton Manor and the Dartmoor Forrest, an iron spike, flattened on one end and inscribed FB (Forrest Boundary) and mounted in a pillar of granite. Unfortunately it seems that the cobra is not the original which was vandalized and replaced in 2015 with a ‘replica’ that was forged in Princetown. From the summit of Eylesbarrow the views are some of the best on Dartmoor with views right out toward Hexworthy out to the North and Plymouth Sound to the South West. The day I was up there was so hot and the sun was really intense otherwise I would have loved to have spent more time taking in the views. As it was I decided to start back down toward my next target, Combeshead Tor. 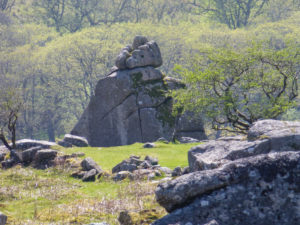 As I said previously, in all the time I’ve lived on the Moor I’d never visited Combeshead Tor and so I was really looking forward to getting there and having a bit of a look around. Combeshead Tor is shielded by higher ground on three sides and so for the most part is hidden away from most views on the moor, however it’s a sizable collection of stacks on the summit and on the east side is Cuckoo Rock. Nobody is quite sure as to why Cuckoo Rock is named so however as with many of these things on the Moor, it’s steeped in legend and myth and some say that from a certain angle it looks like the elusive bird it’s named after. In folklore it is said that upon hearing the first Cuckoo of the year, one should run around the rock three times in daylight to give you good luck for the rest of the year . 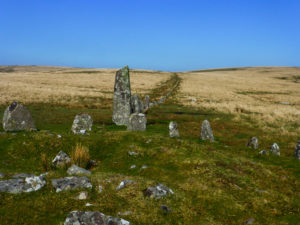 Studying the map the day before I spotted that there was stone row between Combeshead Tor and Down Tor (SX 58689 69260). Further study of this area showed it was one of the best preserved examples of a Dartmoor Stone Row & Circle on the Moor. Although the stone row is regularly identified as ‘Down Tor’ Stone Row it is actually situated a good 700m east of Down Tor on Hingston Hill. The row is 316m long with a large almost 3m tall Menhir at one end and a smaller 1.5m stone at the other and between the two there are 157 stones (originally there are thought to have been 174). At the western end of the row is a stone circle and at the east, the remains of a cist.

After spending a little time taking in the atmosphere around the stone circle before setting off for the last bit toward Down Tor. Once on the top I was able to enjoy the beautiful views out over Burrator, Sheepstor, Leather Tor and Sharpitor before heading back down the track to the car park. It’s an area I have known well for most of my life, I have spent countless hours in and around Burrator…. hiking, fishing, camping, cycling, driving and relaxing and yet I never get bored of being there. It’s one of my favourite places on Earth and to this day, I am still discovering locations that I’ve never been to before.

This walk isn’t particularly hard. Choosing to do it on the hottest day of the year was maybe a mistake in retrospect however it was still thoroughly enjoyable, just a little more challenging than maybe it would have been if it had been a little cooler.

Difficulty
This walk is 9.3km / 5.7mi
No part of this route crosses into any military ranges
There are no bogs
Easy